After spending almost 8 months travelling around Bolivia, we have finally managed to get across the boarder and are now in the country... Also, we have visited one of its major tourist attractions, i.e. Salar de Uyuni and surroundings. Such a cool place! Not only the sparkling white salt plains, but there are geisers, boiling mud pools, colourful flamingos in likewise colourful lakes, weird rocks... Just like one of the better paintings of Salvador Dalí. We spent four days in a jeep on bumby roads, marvelling over all the strange things Mother Nature can come up with - and in a relatively small area! 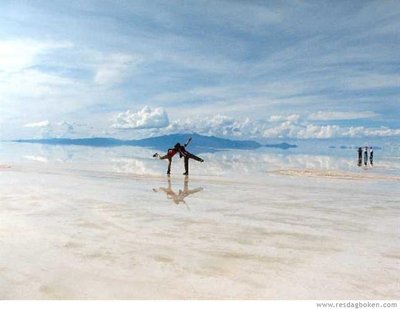 Here we are! Cool reflexions, ey?

Might have been one of the coolest and most unusual things we have seen on this trip, though the French guys in our tour group did spoil the experience a little bit... They were 8 in total, the age of our parents, and they spoke French, only French and nothing but French - and they seemed deeply surprised and slightly hurt that the rest of the world didn't understand this superiour language. They obviously did understand some Spanish, but instead of using the opportunity of being in Boliva to learn some more, they actually corrected both us and the guides!!! If we said Buenos dias & Gracias, they said Bonjour & Merci. The only conversation I had with them was during the first two minutes in the jeep, when they had just frowned upon us speaking English. 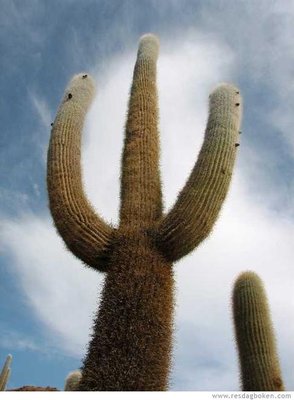 -We speak Spanish too! I said (in Spanish), trying to be nice.
French guy: Oh, are you from Spain, how nice!
Me: No, no, we are from Sweden.
French guy: ...?
Me: In Scandinavia!
French guy: No, I don't know that part of Spain. But our daughter is studying in Palermo.
(Palermo?!? Isn't that in Italy?)

End of conversation... Lucky for us, we also had the supernice couple Sean and Ama, from Canada and Holland respectively, in our tour group. Thank you guys, you saved us from going crazy!

Enough of the salty stuff now, Bolivia has a lot more to offer. Both Santa Cruz and Sucre are two really nice cities, though the roads between the two aren't as nice... Pretty much the same story as last time, 3 days stuck in mud, no food, no water.

Also, we have just spent 3 days around Lago Titicaca, in Copacabana and on Isla del Sol (we thought about doing a daytrip to Puno i Peru too, but in the end we decided against it). A truly beautiful and relaxing place, though I spent most of the time in bed due to some evil stomach disease or maybe just the market food? I don't know, but what I do know is that our 8 month South America trip is coming to an end - only 2 weeks left today! And after all the bad roads and stomaches in this country, we can't help feeling a need for Brazilian beaches and fruity fruitdrinks... So tomorrow we areflying (no more Bolivian busses) back to Santa Cruz, and from there it is straight way to Brazil. We'll need that tan when we get back to Sweden in April! 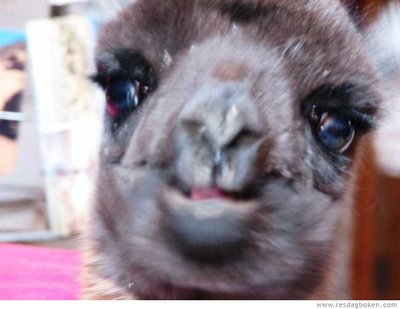 Cute little llama chewing coca leaves, like the rest of the Bolivians

Love to all
//Susanna

Previous Next Table of contents

Happy Birthday my dearie! I hope that you have a fantastic day on Thursday... Bolivia looks really amazing! I have always dreamed of going to the salt fields...
Love Ya,
megs

hey susan! it's been over 6 months now since we hiked through the jungle in vzla. anyway, enjoy to read your e-mails a lot! take care and enjoy suramerica! saludos

This blog requires you to be a logged in member of Travellerspoint to place comments.

If you aren't a member of Travellerspoint yet, you can join for free.